Why Biophilic Architecture is Set to Change the World

Ask architect Koichi Takada what he believes the future of building design should be, and his answer is unequivocal: “Integrating nature is key.” Known for his ambitious nature-inspired landmarks, Takada is a leading proponent of biophilic architecture, an approach that aims to connect the people who use a space with nature. “Research shows that nature has huge benefits on our mental and physical state,” he explains. “Everyone wants to live healthier lives.”

Stemming from the word “biophilia,” meaning humans’ affinity with the natural world, biophilic design incorporates elements of the natural environment in every aspect of architecture: from abundant plant life to natural light, ventilation, and structural forms that mimic nature. And it’s an approach that’s received even greater attention over the past year.

“I’ve seen an increased demand for biophilic design throughout the COVID-19 period,” says Takada. “It’s been an opportunity to pause and rethink, and not just adapt, but shift the paradigm from artificial to natural.” 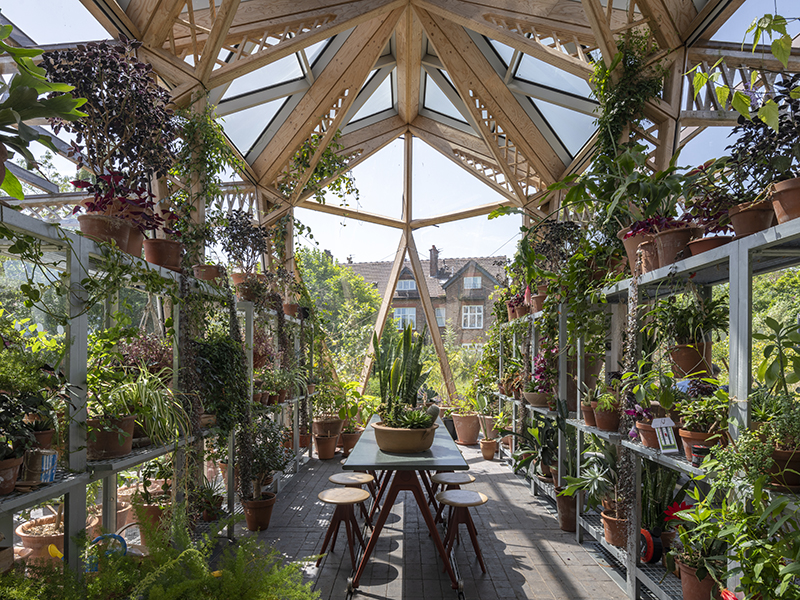 Biophilic architecture can “lift the spirits,” says Foster + Partners. At this Maggie’s cancer center in England, the firm banished hospital-like corridors and instead created “a domestic atmosphere in a garden setting.” Image: Nigel Young

“The key role that nature plays in our lives has been highlighted by the ongoing pandemic,” agrees Nigel Dancey, senior executive partner of Foster + Partners, and points out that this nature-inspired approach goes hand in hand with an increased focus on sustainability. “Biophilic architecture strengthens the relationship between society and nature,” he explains.

Here’s how he, and two other top architects are using that connection with nature to build a greener, healthier world.

The Italian architect behind a number of “vertical forests,” Stefano Boeri is the director of Future City Lab in Shanghai—a post-doctoral research programme exploring the future of cities through the lens of urban forestation. And through his architectural practice, Stefano Boeri Architetti, he’s undertaken an array of world-first biophilic developments. 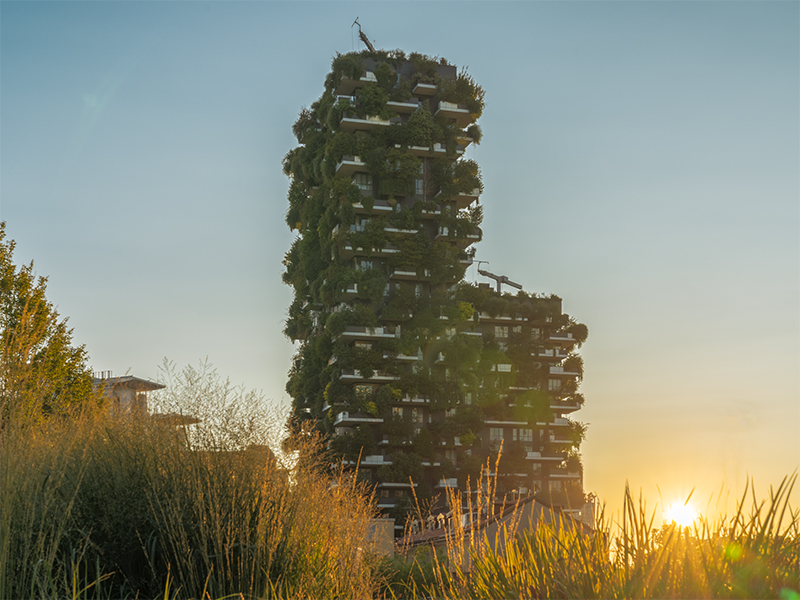 Among his most prominent work is the Urban Forestry initiative, which features high-rise buildings that promote the coexistence of architecture and nature in urban areas. Each tower grafts the equivalent of thousands of square feet of forest and undergrowth into a few hundred feet of urban space. These vertical forests, the first of which took shape in Milan, create new landscapes and transform skylines—all while improving the quality of life for a city’s inhabitants through environmental generation.

“By bringing nature closer to dwelling spaces we can reactivate wildlife and improve lifestyle conditions,” says Boeri. “This kind of architecture responds to climate change issues and helps protect biodiversity. My hope is that it will increasingly enter into urban policies and city planning.”

Experimenting with new takes on city planning is Boeri’s passion. His practice’s next big project—a 130,000-person metropolis known as Cancun Smart Forest City in Mexico—aims to undertake urban foresting on a grand scale, integrating 120,000 plants from 350 species across the development’s 362 acres (146 ha). 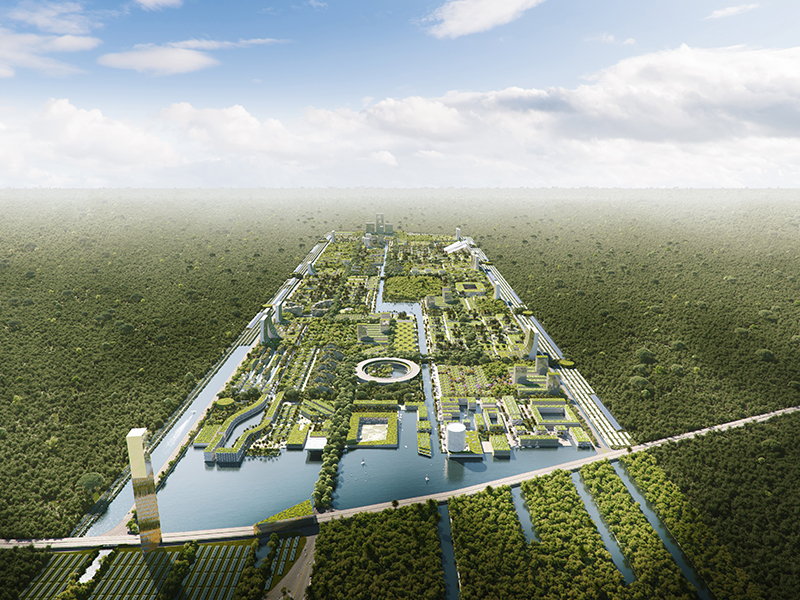 Cancun Smart Forest City will be home to immense parks, garden roofs, and green façades and will reforest the surroundings—which would otherwise have been used for the construction of a large shopping center.

Foster + Partners, a leading architectural practice with offices in cities including New York, London, Bangkok, Buenos Aires, and Hong Kong, has embraced biophilic design based on findings that bringing nature into the built environment benefits well-being.

“Research shows that biophilic environments—ones that mimic nature, as well as those incorporating natural elements—have a healing effect on the human body,” says Dancey. “These kinds of environments enhance physical health and psychological well-being, while also aiding the healing process.

“We have developed this approach through several of our healthcare projects, such as the Circle Bath Hospital and Maggie’s Manchester cancer center, in the United Kingdom,” he says. “While in the U.S., we’ve worked on The Pavilion at the Hospital of the University of Pennsylvania, the University of Iowa Stead Family Children’s Hospital, and the Samson Pavilion at CWRU and Cleveland Clinic.” 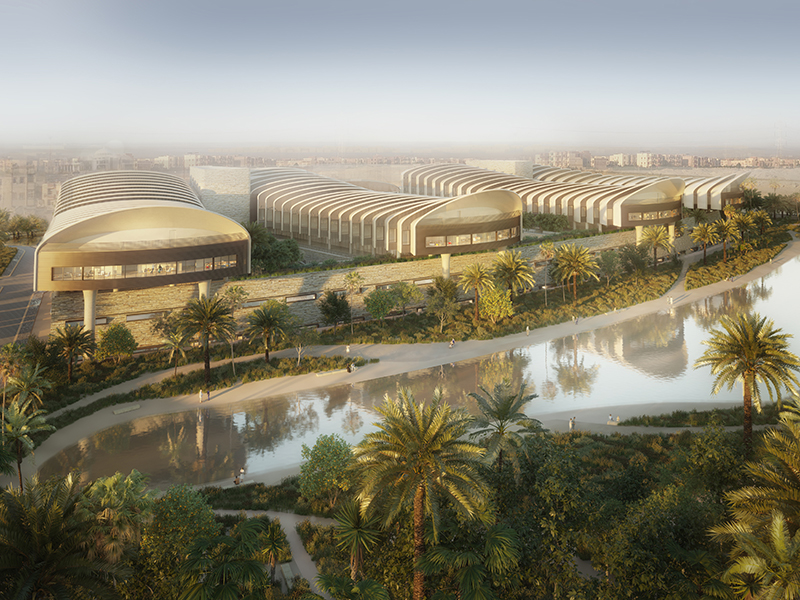 Set within a lush landscape, with views of the Pyramids of Giza, Foster + Partners new Magdi Yacoub Global Heart Center will integrate with its verdant surroundings, optimizing a patient’s experience of care at the hospital.

Each of these projects ensures natural elements are at the heart of the experience the structure provides. Another of Foster + Partner’s current projects, The Magdi Yacoub Global Heart Center in Cairo, Egypt, is expected to reach completion in 2023. Set within verdant landscape, the building is designed to incorporate natural light, greenery, and views of the surroundings throughout.

On the other side of the world, Sydney-based Takada has garnered global attention for his eye-catching architectural designs, which incorporate elements of nature and mimic natural forms.

His current projects include Urban Forest in Brisbane—set to become Australia’s greenest building; the carbon-positive single-family dwelling, Sunflower House in Le Marche, Italy; and the Hope Street residential development in South Brisbane, featuring a 387 foot-high (118 m) waterfall, which will slowly cascade down a tower and moisturize the building’s expansive green walls. 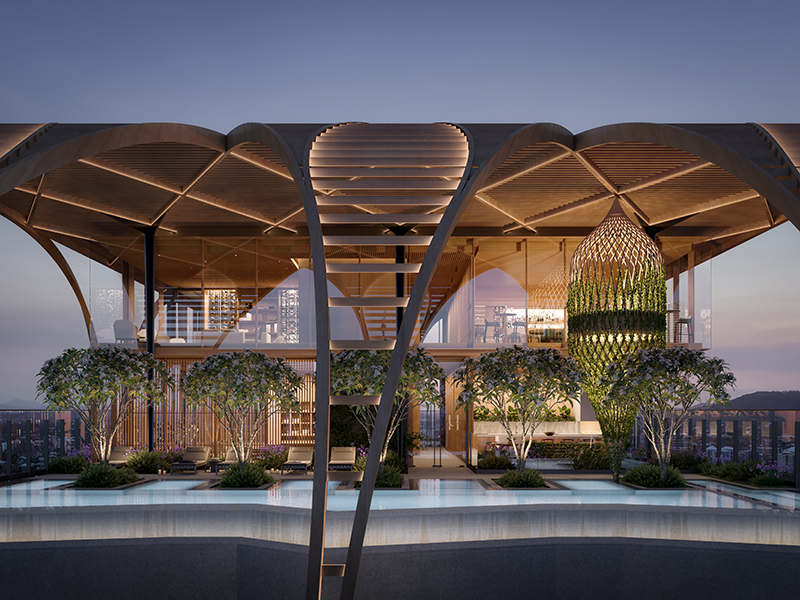 The winding “fluid timber ribbons” on the façade of Takada’s Upper House in Brisbane, reference the roots of the Moreton Bay fig tree, which is native to the area.

“Questioning the loss of nature in cities opened up new possibilities in biophilic architecture,” Takada explains. “We now deliberately draw on the lessons of nature to create dynamic and engaging designs that allow people and cities to reconnect, not just with nature, but with each other.”

“We should be creating more natural settings like New York’s Central Park, but in a vertical form: a living world that makes you feel happy and hopefully richer—and not just in an economic sense.”