Sustainable Meets Smart – The Eco-Friendly Architecture of the Future

As The New York Times points out, eco-friendly architecture is a no brainer. “It’s design’s mom-and-apple-pie issue. Who could be against it?” the paper asked back in 2008. And, more than a decade later, the construction industry has caught on, with the green building market tipped to be one of the fastest growing sectors worldwide. In fact, the number of LEED-certified buildings in the United States alone increased from 296 in 2006 to more than 69,000 in 2019.

Now, architects are turning their attention to new technologies to create buildings that are not only less harmful to the planet, but are actually good for it. Think: smart tech that allows structures to breathe, learn, move, and change shape, mimicking the functions of living creatures and benefiting their environment by producing their own power.

We’ve rounded up five cutting-edge projects from around the world—here’s what they hold in store for the future of eco-friendly architecture.

Thanks to its natural ventilation system—facilitated by a double-skin façade and a solar chimney in its core—the Tower at PNC Plaza uses 50 percent less energy than a comparable building. Image: Connie Zhou

Unlike other buildings that use ventilation systems to move air through their interiors, the headquarters of PNC Bank in Pittsburgh, Pennsylvania, “breathe.”

Designed to be the world’s greenest high-rise, the building features a solar chimney and double-skin façade—now an industry standard for sustainable commercial buildings—which acts as insulation against extreme temperatures, winds, and sound. But its revolutionary windows are what truly sets it apart, with each acting like a lung and automatically opening and closing in response to temperature and humidity.

While the building’s windows provide natural ventilation for 42 percent of the year, vents can also be opened manually by the building’s occupants, with dashboard sensors advising when the surrounding air quality makes it safe to let air in. At all times the automated system guarantees occupants 12 changes of air per hour. 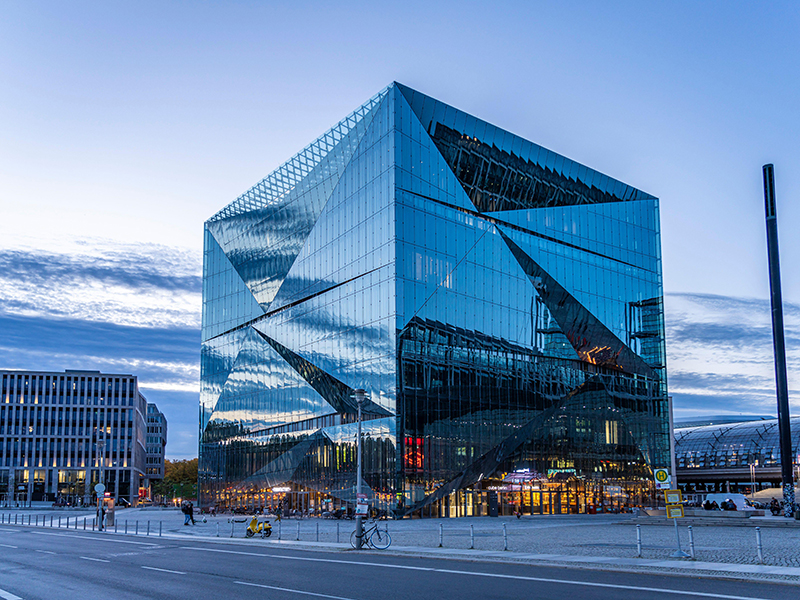 How to follow a building which breathes? How about one that learns from the energy requirements of its occupants and adapts accordingly? Cube Berlin, designed by eco-friendly architecture practice 3XN, does just that.

Named after its appearance, the Cube allows its occupants to control the temperature of their immediate office surroundings with an app (which also allows them to book a parking spot at which to recharge their electric vehicles). The building, powered by what its designers call a “digital brain,” learns their preferences and regulates its temperature accordingly. To round off its green credentials, a double skin ensures that the glass façade is 25 percent more energy efficient than that of other green structures.

Casa em Movimento moves with the sun, ensuring optimal exposure of its solar panels at all times of day and allowing it to create energy, adjust room lighting, and reduce heat consumption in the process.

Casa em Movimento (“house in motion”) takes its inspiration from plants that turn their face to the sun, by literally rotating on its foundations to capture as much solar energy as possible throughout the day.

Originally designed as a home by Casas em Movimento founder Manuel Vieira Lopes, the company has turned its prototype, near Porto, Portugal, into the world’s first store in motion. The building’s interior can also be made to move, shifting according to occupants’ changing needs throughout the day. And, in addition to a home and store, Lopes has also created a simplified design for a vacation home, with an exterior that rotates to follow the sun. 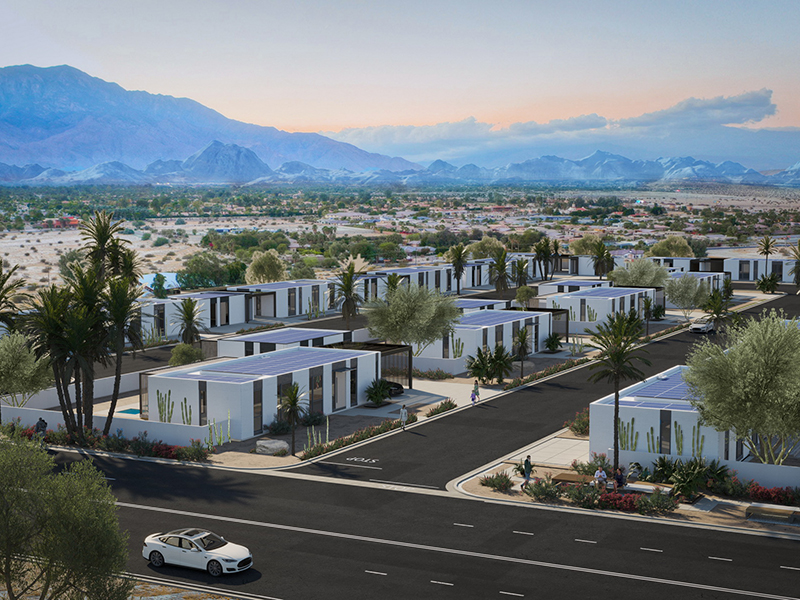 Innovators in the U.S., France, and China have long held that 3D-printed prefabricated components can eliminate construction waste. And now, the world’s first 3D-printed neighborhood of 15 houses, each with a net-zero carbon footprint, is under construction in California.

The joint project, between developers Palari and Mighty Buildings, can be found in Rancho Mirage, an upscale community in the Coachella Valley, near Palm Springs. The design of each eco-friendly residence references the mid-century architecture for which the area is known. But unlike the 20th-century originals, these are capable of being powered entirely by the sun. Other green features include built-in systems to purify air, filter water, and create circadian lighting to sync with occupants’ natural body clocks—a key well-being benefit.

Set to be completed by next spring, Palari already has plans in place to follow this neighborhood with further 3D-printed communities in the San Fernando and Napa valleys, and on California’s central coast.

“Many sustainable homes are super insulated and are very opaque, with limited interaction with their environment,” says architect Todd Fix. “M? Ventus attempts to maximize sustainable features, without losing the soul of the house.”

Shape-shifting may be more a function of mythical creatures than real ones, but architect Todd Fix’s M? Ventus house, which changes with the weather, is ready to move from drawing board to the dramatic location of your choice.

The home comprises a cantilevered living space with glass floors, ceilings, and walls, which allows occupants the thrill of living immersed in nature—suspended over a beach or high in a rainforest, with thrilling vantage points from every angle. Daylight, heat gain, and privacy can be maximized at the touch of a button: retractable screens and insulated shells move to encase the glass structure as weather conditions change.

This revolutionary house, driven entirely by solar power and wind turbines, can be built in remote off-grid locations where gas and electricity don’t reach, and is cooled by pools of water around its edge. It also offers a roof garden for growing vegetables and an outdoor bridge, which connects the main living space and a secondary structure intended as a home office.